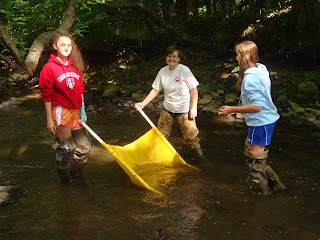 Today we took a trip to the upstream (before the Woodcock Dam) part of Woodcock creek.The micro-invertebrates we found in this part of the creek were far different in variety and number compared to the downstream (after the Woodcock Dam) part. It was very interesting to see how a stream can be effected by a dam including the animals that live in and around it. To catch some of the micro-invertebrates in the stream we split up into groups of three. Then we held a kick net in the water and kicked up the water in front of it to loosen the dirt and rocks. This allowed the animals to swim right into the net so we could take it out of the water and observe them. We compared the animals to discuss which ones were more susceptible to pollution and how they would adapt to live in a stream. We found many different macro-invertebrates including hellgrammites, water pennies, and dragonfly nymphs.