The first activity we did today, after all the water chemistry, was collecting macros. These are small little bugs and insects that hide under rocks. We had these two nets that were attached to poles on either ends that we used to collect the tiny macros. After kicking stuff into the nets we went back up shore to pick out all the mayflies and other macros. They were so tiny that afterwards I had to wait a bit so my eyes could adjust back to normal. We found dozens of those little things that we could not get t
hem all. From larvae to nymphs to mussels to worms we found so many species. We even found three crayfish and they were so cute! 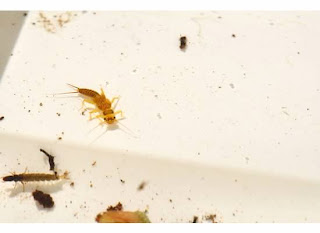 My favorite things so far since my mom dropped me off was the Geocaching which was like a geographical scavenger hunt and the Geology Stream Table. The Geology Stream Table was so fun! It was almost like a gigantic sand box with water. We made the Pittsburgh point by making a few lines that intersected and let the water do the rest. Then we sort of failed at making Niagara Falls. Overall we got messy in the sand and water almost like we were at the beach which I thought was the highlight of the afternoon. Laura M.
Posted by Creek Camper at June 24, 2013