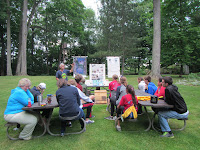 This evening we drove over to Crawford to view bats with Terry Lobdell. Terry is a bat enthusiast who designs and builds bat houses. With him, we mainly talked about Little Brown Bats and Big Brown Bats. Big Brown Bats weigh about twice as much as little brown bats; also, Big Brown Bats prefer a slightly larger crevice to roost in (7/8'') than Little Brown Bats (3/4"). Terry has experimented with different designs and materials for bat boxes, including one with a glass viewing panel. He has built approximately 300 boxes all over the U.S. 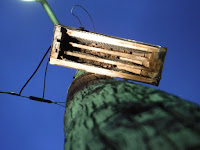 Losing bats can have a significant influence on the number of pests that eat crops. In one case, an organic pecan farmer was losing about a third of his crop to a bug that later turned into a moth. He put bat boxes in his field, and eventually bats came and fed on the moths. By the next harvest, he had virtually no pests. Without these animals, we may see an increase in the amount of pests in farmers fields. Hopefully these adorable creatures will be able to come back!
Posted by Creek Camper at June 29, 2016