Creek Campers and councilors gathered in Alden Hall to learn about geology from an Allegheny alumni. We first learned about topography maps, learning how they are used to measure elevation and steepness. We then had the opportunity to use an Augmented Reality Sandbox. This sand table had projected contour lines on it, making a 3-D topography map that changed as the sand was molded into mountains and valleys. Creek Campers made a Grand Canyon out of the sand and then virtually flooded the map. This was a perfect example of how water sheds work, with water running off of different mountains in different directions. After utilizing, (playing with), the Augmented Reality Sandbox, we transitioned to using real water and sand. We used a Stream Table, a large oval shaped container with a gently sloping pile of sand taking up three fourths of it leading to a pool of water at the last fourth. A stream began on the top of the hill and ran down to the pool. We observed how the water took the path of least resistance through the sand. Dams were then constructed and a small pipe, a plastic wall, and a toy tent and campers were used. Creek Campers shaped multiple worlds in less than an hour. 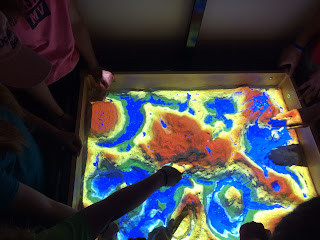 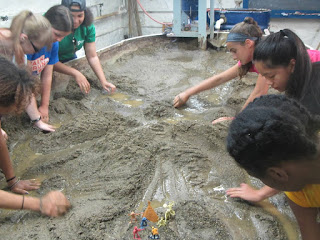 The topography maps and sandbox sound like a fun way to learn about geology. It looks like everyone had fun making different designs with the sandbox!