At French Creek, we caught wild hellbenders, the largest species of salamander in North America.  We split into two groups for finding hellbenders.  We found them by lifting up large, flat rocks to see if there were any under the rocks.  There were a lower amount of hellbenders than expected.  Once a hellbender was located, we used nets to capture them, and we then examined them.  We learned how to determine a hellbender's sex.  Males have heads that are broader than their shoulders, and females have heads that are narrower than their shoulders.  We also noticed various scars on some of the hellbenders.  We learned how to hold the hellbenders properly, because their slimy bodies make it easy for them to escape from our clutches.  The hellbenders were then released.  After handling the slimy amphibians, we used bleach to sanitize our hands.  In total, around 20 hellbenders were caught. 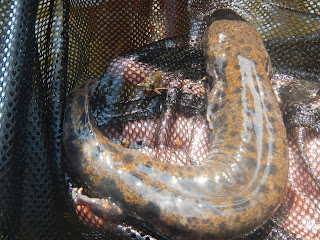