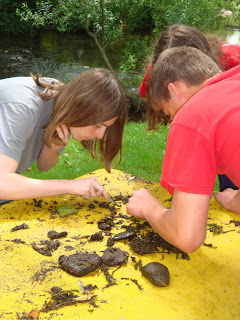 Today we dug in the mud and under rocks to find different species of macroinvertebrates. Today we have caught some scuds, crawdads, and lot of other cool and epic stuff. We used a yellow cloth with two poles on the outer edge as the device to capture them. While two people held the poles the others went upstream to stir up rocks and silt. After we caught a number of different macroinvertebrates we estimated the number of each insect caught and from that we derived at the conclution of how clean the water was.
Posted by Creek Camper at June 25, 2012

Dano! Looks like this is right up your alley and you are having a great experience. ENJOY!