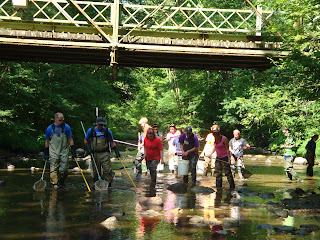 Today was a day of electricity, thrill, biological creatures, and waders. This was a day many of the campers were looking forward too! Early this morning, we headed to the Woodcock stream to go electrofishing. There to help us were two men from the Pennsylvania Department of Environmental Protection. We stepped into the unique waders fitted for us and we headed to the stream. We were all anxious to grab a net and get in the water to catch stunned fish! Right before entering the water, we were given safety instructions. We were all half listening because all we cared about was getting in the water until the scariest words of the day were spoken... one of the men from the PA DEP told us that if we touched the water there was a chance we would be shocked! He also told us that the shock was not pleasant and that it felt like you were grabbing an electric fence! This made some of us weary, but not enough to kill the excitement. Soon after we headed down the creek, there were fish floating by and nets going everywhere!The buckets were filling fast and there were many different types of fish being collected. We followed the men from the PA DEP like our lives depended on it. The best feeling was when they lifted up their nets to put the fish in the buckets. It gave you a feeling of accomplishment and excitement! At the moment it seemed like it was the only thing that mattered. That was until we realized we still had to identify the fish and we got a chance to look at them up close. When the time came, we all gathered around the buckets and listened as the fish were identified and we got an up close look. We passed around the fish and waited with impatience for our turn to be passed the container! After the fish were identified and accounted for, we got a chance to reach in and grab them for ourselves. The fish were all unique and amazing! We caught big ones, small ones, colorful ones, and even camouflaged ones! Letting them go was very satisfying. We all knew that we spent a lot of time catching, identifying, and "playing" with them. But when we let them go, we knew that they were helping us with our project and they still had the chance to live and keep the fish cycle flowing! (:
Posted by Creek Camper at July 19, 2011

I thought electricity and water should NEVER be played with!