Herp Hunt in the Bousson! 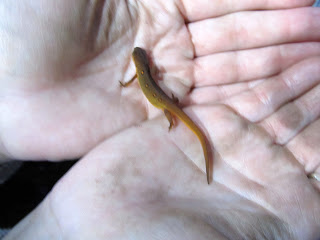 In the Bousson Preserve today, we met a herpetologist named April, who showed us all of the many salamanders and newts in the forest. First we went to the spring. The water there was cold enough that even with a small amount of water, there ws enough oxygen to sustain a wide array of creatures. W e found Northern Reds, Duskies, slimys, and a plethora of other salamanders. When we went into the woods, we found many similar species and a species of long-tailed newts that has never been seen in the area before. In all we had fun and it sparked an interst in herpetology. When we got back to the dorms, one of the councelors found a red spotted newt on the ground with lint on its feet, indicating that it decided to hitch a ride here!
Posted by Creek Camper at July 14, 2011

Wow! so much fun you must be having at camp with all the wonderful discoveries!

Salamanders are so cool! What did you do with the one who decided to visit Allegheny?