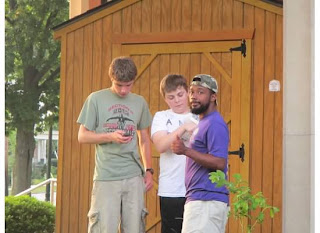 Yesterday after dinner we went geocaching. We all came back to the international house and got GPS' so that we could plug in coordinates and go to the compass that gave us the general direction the next set of coordinates was. The teams were divided up between boys and girls, but some of the counselers or guides switched around to make the teams even. I was on the boys team and we had to go all around campus following the GPS. I think that it wasnt quite fair though because it seemed to me that the order of the coordinates for the boys made us have to keep going far across the college campus. On the bright side we did get to see a lot of it. The last coordinates led us to a bush where bags of stuff for the campers was hidden. The bags contained a light that you could strap around your head, a shirt for the camp, and a towel. The girls were waiting nearby eating popsicles, which we got to eat once we found our bags. We stayed outside for a little bit just hanging out  and eating popsicles until we went back inside
Posted by Creek Camper at June 24, 2013

Geocaching sounds like a more complex form of letterboxing...with better treasure at the end!