Last night at 9:00 pm we walked around in a dark graveyard with a Mummy! Ok... not a REAL mummy, but with Ron Mumme to look for owls! We heard young Barred owls screeching in the ravine on the edge of the graveyard! We hoped to see them but after calling for about half an hour we headed back to campus to look for a pair of Eastern Screech owls that live in the wooded area outside the admissions office. We walked around their territory calling and where about to leave when we heard them! We used a huge spotlight and found one in a large tree and were able to watch and take pictures for quite a while before the owl decided to take off! Here is a photo of the Screech owl we saw; 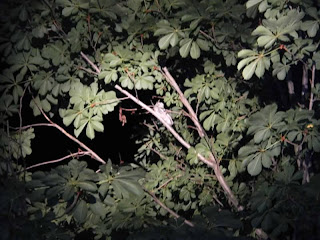