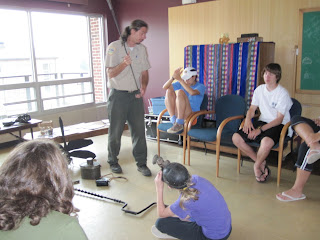 Abandoned mine drainage is something that would put today's not-so-creative horror movies to shame. It occurs when an abandoned mine (mostly coal) begins draining its refuse into a nearby creek or stream. This drainage will make the acidity and levels of iron spike in this body of water, killing off all the organisms. The stream then is either clear or takes on an ugly shade of orange or some other unnatural color (depending on the contents of the drainage). Wil Taylor, our friendly instructor, told us about this travesty and about the hard life of a miner. Miners often worked hard long hours from the time they were 8 or 9 years old, sometimes even as young as 6. After the miners hit middle age, about 40 or 50 years, they were doomed to getting black lung disease and dying a miserable death. On a more uplifting note, we played a game at the end where the goal was to collect the most tons of coal (conveniently represented by little pieces of paper) without "dying". A large number of us "died" in a methane explosion but some people got lucky and made it through without harm. Two of the Nicks even got their arms cut off, fell down a mine shaft, and still made it through the game! 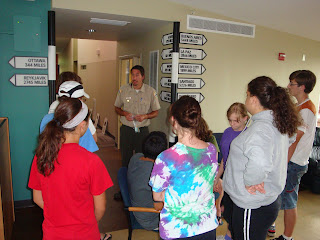