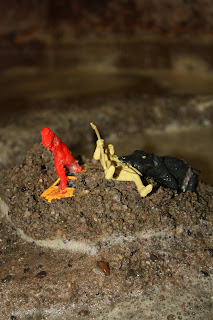 The best part about today was the water table(the sandbox with water). We built so many, many failed waterways. We eventually learned how to manipulate the sand to make a fairly permanent "stream".We have two Lorax's this year. In the sandbox we found "this year. In the sandbox we found "Godzilla!?" and built him an Island and a moat (A.K.A. "Awesome Land"). We even built an underground tunnel that suprisingly held for a while.

Good to know that Godzilla is in Northwestern PA! I will have to stay away. Have you learned about erosion and how rapidly it can impact the land forms...and the waterbasin turbidity? Makes me think about the sandbags on the levy in New Orleans during Katrina. Hard to contain nature.