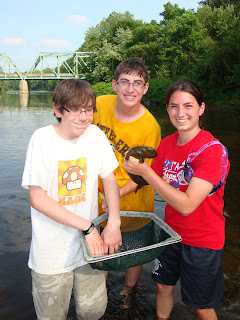 The hellbender... is the biggest salamander in the United States. At a length of up to 29 inches, these huge salamanders breathe through their skin and have a very odd way of defending themselves. Finding them was relatively easy, catching them was very difficult. The hellbender excretes a slimy film whenever handled, allowing them to escape even the firmest grip. Despite this fact, we as a group captured eleven total hellbenders with a combination of teamwork and luck. To find a hellbender, you must lift a large rock, wait for the murky water to clear, and then spot them. Once you find them, you have to catch them. This was done by grabbing it, putting it into a net, and then transporting it to the bucket before its’ slippery hide escapes. Some were fortunate enough to catch a hellbender on their first try, others were not, but in the end everybody had fun.

You're now qualified to stand in cold Alaskan streams and catch salmon in your teeth!