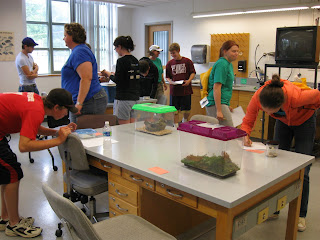 Yesterday, we went on our herp hunt, but before we could do it, we had to learn about them. A woman named, April Claus, came to talked to us about the reptiles and amphibians of Pennsylvania. She explained to us that amphibians are very important to the ecosystem because their main prey is keeping burgening insects from over populating.

Originally we were to go looking for Hellbenders in French Creek but the creek had risen too much from the rains the previous night. It was too dangerous for us to look for them. This, however, did mean we had more time to spend learning about them. Some of the animals we learned about were, milksnakes, timber rattlesnake, spring peepers, red-spotted newts and spotted salamanders. The information she gave us was extrememly interesting because not many of us knew about the creatures she told us about. April was also an entertaining as well as knowledgable person and she obviously loved her field. Often she would add jokes to her presentation to make it more interesting.

After we learned about these species came the fun part. She gave us a test using the information we had learned from her lecture, to identify and answer the questions that were asked on the living specimens of several species. We were even allowed to hold the cornsnake and milksnake. The cornsnake was a female that loved to wind herself in knots around your wrists and arms. the milksnake was constantly searching for a place to hide and had to be extracated from one of the boys hoods. The test was also difficult, there were many questions that we had to have been paying attention to answer and the stakes were high. The person who achieved the highest score got a prize. The classes highest score was thirty-five out of thirty-nine. There was a winner out of both boys and girls.

Overall, I had never thought that learning about amphibians and reptiles could be such an interesting and fun experience. I was proved wrong. It was an illuminating prelude to our final adventure for the week: a trip to Bousson, an Allegheny College environmental experimentation center. Though this was one of our final activities, I enjoyed it greatly even though I was starting to feel sadness from the impending departure the next day.
Posted by Creeker at July 24, 2009