Well, we did a lot of things today: we went on our canoe trip and search for freshwater mussels, then we ate our lunch on the banks of French Creek and got a train to blow it's horn at us as it passed. 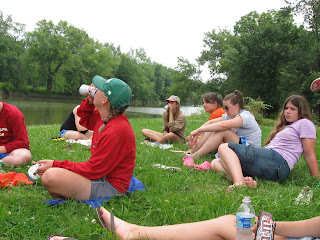 During our lunch, we met with a man named Brian from the County Conservation District. He had come with us on our canoe trip as a guide. He explained about conservation efforts for the French Creek watershed and taught us about how people could save river banks from pollution and erosion. We learned that a lot of conservation efforts are more that just "saving the planet" but it's also about human relations. To go into conservation, you must also be good at persuading people. We learned that agriculture plays a huge role in both conserving and polluting rivers and streams. People with jobs in conserving watersheds often must work with farmers and convince them to change their ways to newer, more eco-friendly ways. For instance, Brian explain to us that when people first settled the area, they placed their barns in low ground near streams, creeks, and rivers. This was so that their livestock, primarily cows, had access to a continuous water source. To do this, they cleared all the trees along the creek to ease their animals paths. This unfortunatly allowed for the cow and such to defficate and unrinate in the water therefore adding extra nutrients that the stream may or may not have needed. Now the watershed conservationalists, as well as others, are attempting to convince farmers to fence their cows away from water.

Brian also works to rebuild reparian buffers along the sides of creeks. A reparian buffer has trees on it and helps to protect from soil erosion. This shows how important it is to conserve banks.

There's still much more of the week to go and I am very excited to see what the rest of the week brings!!
Posted by Creeker at July 22, 2009