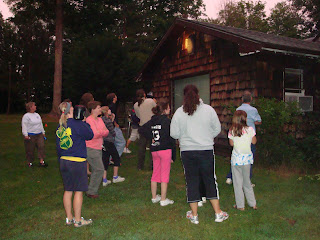 Fixated we stare intently upon the bat box. Nothing moves, but suddenly, something emerges. Something sinister. Something furry. Something that drove me absolutely batty. Yes, it was a brown bat, bloodthirsty and screeching.
Just kidding it eats bugs and we couldn't hear it's sonar at all. The local bat-enthusist, Terry, showed us some of his numerous bat boxes and their residents right before they took off for the night's hunting. We became well informed on the types of bats that are easy to find locally, where they nest, how many there are, what myths about them are false, what they eat, and what eats them. We sat around one of the boxes as they all crawled out and flew away in search of prey, we used a bat-detector to hear their sonar as clicks. The night was pretty, peaceful, and perfect for bat watching as it was humid and there were bugs aplenty. Nom nom nom.
Posted by Creek Camper at July 21, 2010