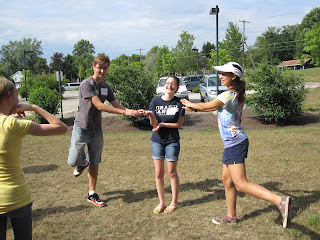 As soon as everyone arrived, Matt took us outside to play a very fun but embarassing game, Bippidi Boppidi Boo. You stand in a circle and one person is in the middle. If the person in the middle points at you and says "Bippidi Boppidi" you have to say "Boo." But if they say anything else, like Dippidi Doppidi, you don't say anything. And if you do, you're in the middle. Another way to get people in the middle is to say something like elephant and that person has to make and elephant trunk and an elephant noise while the two people on either side of you make ears. Each thing requires three people and a noise. If you or the other two people don't do it, the person who was pointed at is in the middle. Every so often, Matt would add another action. It eventually got really hard.
Before bed we played another game: Catch Phrase. There is a handheld and it gives you a word and you have to get your team to guess the word and when they do, you pass it to the next team. The timer keeps going and it gets faster and faster. If you're holding it while it buzzes, the other team gets a point. We played Boys Vs. Girls. The boys won the first game, but the girls redeemed themselves and won the second game.
Posted by Creek Camper at July 19, 2010