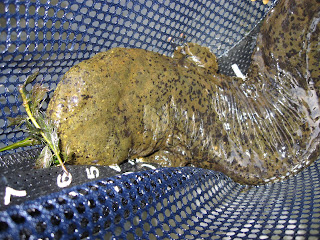 Hellbenders! we went herp (the study of reptiles and amphibians is herpetology) hunting and caught around a dozen hellbenders, the second largest salamander in the world, right here in PA. They were extraordinarily slimey and most slipped right through our fingers but we eventuallycaught all we saw. We weighed them, tagged them if they weren't already, took genetic samples, and tested them for an amphibian-killing fungus called Chytrid. After we let them go back to their giant rocks where we found them because if we just threw them in they would kick out the hellbender living under the nearest rock. They were awesome.
Posted by Creek Camper at July 23, 2010

Awesome! Must be the "Summer of Herps!" everyone is finding them this year!

Are the streams getting cleaner, or are the Hellbenders just happier? Inquiring minds want to know!