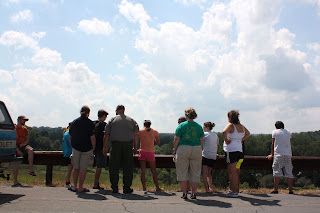 Today we took a dam tour with the dam guy and watched a dam slide show. When we were done with the slide show, I was asked what I learned but I didn't have an answer so the dam guy gave me a while to think it over. As we were heading over to the dam, I was given some ideas as to what I should say when I was asked again. As we were leaving, I thought I had gotten out of it, but then he remembered. I told the dam guy that I learned some dam stuff and everyone thought it was rather clever. I think we're all sick of dam jokes. Including Nick 3's bad puns.
Posted by Creek Camper at July 21, 2010