Lots and Lots of Stars

Picture this: You are exhausted. You've been going full speed for days. Hurrying from one amazing and exciting thing to the next and then you are in a dimly lit room, in comfy chairs, at 9:30 at night. What would you do? Now if we had been talking about the stages of mold growth or something to that effect, we might just have all taken power naps right there. But Professor Lombardi was describing to us, the secrets of the universe. He started by showing us an animation. It began with a shot of a football player on a football field and picture by picture it slowly zoomed out. Showing the entire the Earth, then the solar system then the Galaxy and then farther and farther out until the diagram was 100 billion light years wide.

He told us that there are about 10,000,000,000,000,000,000,000 (that's 1 with 22 zeros behind it) stars in the universe. He didn't even try to say 10 bajillion or what ever it would have ended up as, but simply, a 1 with 22 zeros behind it. He said that the universe isn't infinite, or at least the space that contains the galaxies isn't. He tried to describe to us how that works by asking us to picture a balloon that contains all of the galaxies and then as the balloon expanded the galaxies all... Honestly, by that point my mind had blown for so long that I couldn't begin to pull together the scraps of my brain to fathom what he was describing. I think mind blowing needs to be taken in small doses. 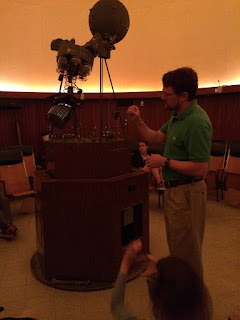 We looked at the stars projected on the domed ceiling while he pointed out constellations. We pretty much all agreed that Big Bear and Little Bear really should have been named Big Cat and Little Cat because no bear could have that long a tail. Alexx now wants to name her kids after the three stars in the Summer Triangle, Vega, Deneb and Altair and I need to go learn more about astronomy because it was just so amazing that I can't come up with good enough words to describe the experience and was definitely my favorite thing all week.
Posted by Creek Camper at July 09, 2015