After doing the water tests and kicknets this morning we were met by Jay Gerber and his two interns Killian and Darren to learn about electro-shock fishing. Basically electro-shock fishing is a style of fishing sends out a low current of electricity that causes minimal harm to fish, catches a large variety and amount of fish and is reasonably quick. The fisher walked slowly upstream stunning the fish while a crowd of campers followed behind catching the fish in nets. The electro-shock works by passing a current between two metal rods and any fish in the area are mildly shocked and easy to collect. Some fish recovered quickly while others took a bit longer based on size and species. Jay told us that only about 5% of the fish die after being shocked and they are mostly the tiny ones. We caught fish from as little as an inch and a half long to eight inches. In the end we caught 10 different types of fish and between 45 and 60 total. This proved that the water was healthy for wildlife to inhabit because a number of the fish were indicator species - low pollution tolerant -  and the diversity were very interesting to observe. 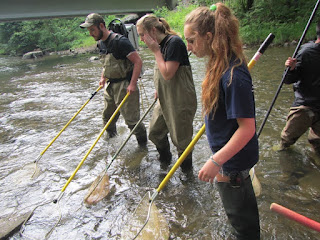 That's an amazing way to see the different fish!