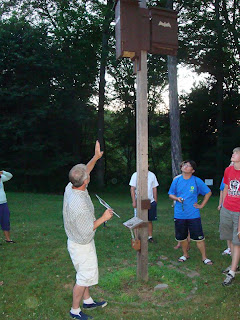 A few days ago, we went bat watching! Our guides for the night were Terri and Miranda. Terri is one of the few in the country who build bat boxes. Most of the bats he had were called Little Brown Bats. Most people believe mice and bats are closely related but actually, the bat is closer to the lemur which means that bats are closely related to us! Terri told us that the reason he had so many bats was because he was near water. When the bats first come out at night, they go to the nearest water source. That is why they are more bats found near water.
Posted by Creek Camper at July 21, 2011