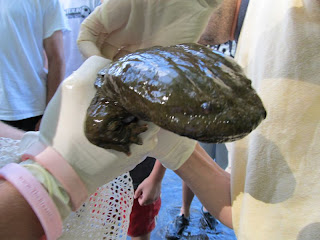 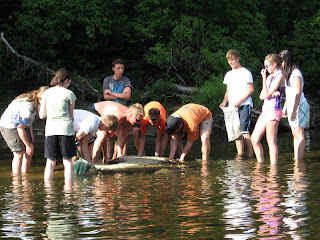 Today we went to one of the most awesome programs that creek camp offers; catching hellbender in french creek. It was so cool! Hellbenders are the largest salamander in Pennsylvania, and they are pretty high up in the list of the largest salamanders in the world. Unfortanatly, hellbenders and all of the other amphibians in the world are facing a deadly disease that is spreading quickly. This disease is called chytrid disease and is wiping out species around the world before we can even research them. We had to conduct our hellbender catching in a certain way, so that we could test them for this disease and try to stop it from spreading. Every salamander took about ten minutes to process, and while it was being processed, no one could lift up any rocks or find any salamanders. So we ended up catching about 10 salamanders and processing them. To find the salamanders we looked under extremley large rocks, but there was one rock that was massive that had two underneath. One of the other memorable hellbenders had a large wound on its head. We were told that another hellbender had gripped its head and cut that hellbender with its velcro like teeth. Everyone was able to feel the hellbenders that secrete a mucus when they are scared and were intensly slimy. However, because of chytrid disease, everyone had to spray their hands after touching the hellbender with 10% bleach. It was fun to catch all of the hellbenders, but it was a little bittersweet being one of the last things that we did and because of the chytrid disease.
Posted by Creek Camper at July 15, 2011