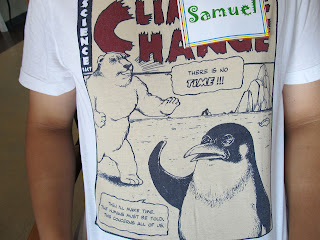 On our first night at Creek Camp, we were supposed to be getting to know each other. It was all going well. until Samuel came. The game was broken up as we tried to secretly read the comic on Sam's shirt. We gave up on being sneaky, and crowded around him to read his shirt, which was a warning about global warming. Someone took a picture of it.

Polar Bear: There is no TIME!!!

Penquin: Then I'll make time. The humans must be told. This concerns all of us.
Posted by Creek Camper at July 18, 2011