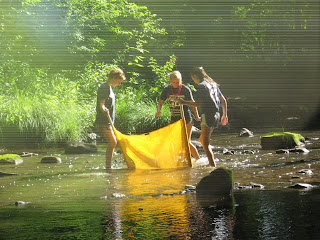 Macrosampling is the measuring of invertebrates in a stream. It is done by placing a net on the streambed and kicking up the dirt in front of it to dislodge any creatures hanging onto the rocks. We were only looking for invertebrates, so we unfortanetly had to throw the fish and crayfish back into the stream. Then we picked up the bugs and put them into a tank. Upstream did not yield as many bugs as downstream did, but there were more fish and crayfish that were larger than they were in the downstream area.
Posted by Creek Camper at July 19, 2011