Critters in the Creek: Invertabrate Sampling 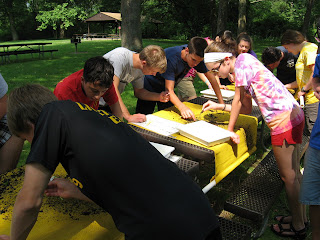 This morning after water sampling, we headed out into the creek in search of macroinvertebrates. In order to capture the bugs, we used a kick net, which is a fine screen hung across two poles. To use, two people hold the poles and another two stand in front kicking up invertebrates so that they are captured and held in the net. After this process was completed, we laid the nets across the picnic tables and took forceps to pick out the critters and put them into a water tray. Once we did this, we took a total group consensus on the amount of each species we had. These numbers were used to calculate PTI (pollution tolerance index), which shows the cleanliness of the river by using a formula that takes into account the number of sensitive, moderately sensitive and tolerant. Overall, this process was fun as it was interesting to see what is really under your feet when you are in a creek. It was also interesting to observe how the bugs interacted with each other.
Posted by Creek Camper at July 11, 2011

We hope you found a plethora of macroinvertebrates! We're sure it was interesting.

Well, looks like you guys are already qualified to be critter counters. For the record, we are both moderately sensitive.

I hope it was a clean bill of health!